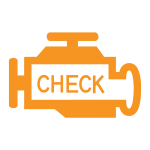 Why is my check engine light on?

There are a number of reasons why your check engine light will turn on, so it is important to bring your vehicle in to get a diagnostic test right away.

Every vehicle built since 1996 has been equipped with an On-Board Diagnostics (OBD) System that monitors engine performance. Discrepancies in performance levels are reported through your vehicle’s computer system. Once the check engine or service engine light is displayed, your next step should be to seek out an engine diagnostic service or an engine tune-up. Engine diagnostics allow us to gather helpful information about the operating condition of your engine. The insights obtained during an engine diagnostic will determine the extent of suggested engine repairs.

The most common diagnostic trouble codes are generated in response to malfunctions in the power-train. Ultimately, regular engine tune-ups are necessary to optimize engine performance. A tune-up is also one of the most effective ways to prevent unexpected engine trouble. During an engine tune-up, our staff may replace the spark plugs, spark plug wires, air filter, fuel filter, and distributor cap and rotor in your vehicle. Our experts will also check emission levels, fuel lines, and belts and hoses. Engine diagnostics and regular engine tune-ups can help extend the life of your vehicle and improve the health of your engine.

Benefits of engine diagnostics and performance.

While regular engine maintenance will help ensure that your engine always performs at peak conditions, there are also signs you can look for that indicate an engine repair service is needed. The check engine or service engine light is a sure sign that your engine should be looked at by an expert sooner than later. Most of the time, your vehicle’s On-Board Diagnostics System will detect an engine malfunction and store the corresponding repair code, which can be accessed by a member of our service staff. Slow-cranking, rough idling, stalling, knocking, or pinging while accelerating are all signs that you should seek engine repairs or engine diagnostics to determine the full extent of your engine trouble. A decrease in gas mileage and detectable loss of power during acceleration are also signs of an impending engine tune-up or engine repair service. Engine warning lights help alert drivers to minor issues before they become major repairs. Be sure to follow up with our staff once your vehicle’s On-Board Diagnostics System detects a problem with your engine.

The OBD System, or On-Board Diagnostics System, was originally installed to monitor vehicle emissions, but it also detects problems within the engine. Both OBD I and OBD II systems exist, with OBD II systems becoming the standard in vehicles manufactured after 1996. The OBD is connected to the engine control unit (ECU), which helps your engine run efficiently while keeping emissions low. The OBD can identify and warn the driver of engine malfunction by sending error notifications to the ECU system. The ECU is in charge of several engine processes, including the mixture of air and fuel, emissions, and engine timing. The ECU uses sensors to monitor them or make adjustments.

If the ECU detects malfunctions, it triggers the check engine light on the dashboard. The OBD system then records the code pertaining to the problem. The code can be accessed by a trained technician through engine diagnostic equipment in order to properly diagnose the issue. There are a number of reasons why your check engine light will turn on, so it is important to bring your vehicle in to get a diagnostic test right away. Here are just a few common reasons:

Engine diagnostics serve to keep your engine running efficiently. The OBD system is capable of detecting malfunctions before they lower engine performance or cause severe damage. Because of the mandatory OBD system, your automobile is capable of monitoring and diagnosing its own performance.

When your check engine light turns on, it is time for you to contact us for an engine diagnostics service. Our experienced staff will work hard to get your engine working again properly in no time. We do a comprehensive computerized diagnostic test using the Snap-on VERUS Edge diagnostic scan tool.

Don’t ignore it! Learn what the on-board diagnostics mean for your vehicle and how we can help.​

Show us some love!